July 20th marks the 50th Anniversary of the Apollo 11 Moon Landing. Due to media attention a desire to take a closer look at the Moon may grow as this date approaches. Unfortunately the Moon will not rise until 11:14PM on the anniversary of the landing. As a result the International Astronomical Union is organizing a global lunar observing event on July 12th called “On the Moon Again”. Between 8PM and 11PM on Friday July 12th, members of the Victoria Centre of RASC will set up telescopes in Oak Bay at the Cattle Point Dark Sky Urban Star Park. If weather permits they will be happy to share views of the Moon with you.

Victoria Centre telescopes will also be in position at the Dominion Astrophysical Observatory every Saturday evening in July from 7:15PM to 10:45PM for weekly Star Parties. These events, co-hosted with The Friends of the DAO, will include the following Moon related lectures:

In addition to the above programs these Star Parties also include tours of the historic Plaskett Telescope, the Centre of the Universe Museum and Planetarium shows. Obtain free tickets to the Saturday Star Parties at the Dominion Astrophysical Observatory.

During the week of the July 20th the Friends of the DAO will hold the following additional lectures on Apollo at the Dominion Astrophysical Observatory, starting shortly after 7:00 PM.:

Wednesday July 17: Apollo in the Age of Aquarius by Dr. Dennis Crabtree

Thursday July 18: The Voyages of Apollo by Dr. Philip Stooke

The Centre of the Universe at the DAO will also be open to the public from 10 AM to 3 PM on Tuesday July 16 through Friday July 19.

Here is more detailed information of the scheduled Saturday Star Party lectures at the DAO:

Abstract: A summary of the Apollo Program including its origins, steps along the way to the Moon, the choice of landing sites and a pictorial look at each mission.

Bio: Phil Stooke is a planetary scientist and cartographer with a PhD from UVic. He taught in the Centre for Planetary Science and Exploration at Western University in London, Ontario until his recent retirement. He has published The International Atlas of Lunar Exploration and similar books on Mars, and is currently revising his lunar atlas.

Abstract: In 1969, at age 8, the Apollo missions motivated me to become an astronomer. Very quickly I mastered the subject, but then over the following 50 years I mostly found out how little I know. In this presentation, I will present my 30-year time series of lunar phase observations, and my lunar sketches from the past year which earned me the Royal Astronomical Society of Canada “Explore the Moon Observing Certificate” (https://www.rasc.ca/observing/explore-the-moon-observing-certificate). And you will be introduced to “Enkin’s Daily Moon” where images of the moon explore “the passage of time, illumination, the feminine, and world unity”. (https://www.facebook.com/EnkinsDailyMoon/)

Bio: Randy Enkin did not become a professional astronomer. He is a Research Scientist at the Geological Survey of Canada, working on earthquakes. He is an enthusiastic member of the Victoria Centre of the Royal Astronomical Society of Canada.

Abstract: This presentation will show the entire Apollo 11 moonwalk as it was televised on the evening of July 20, 1969, along with descriptive slides. Chris Gainor will discuss the flight of Apollo 11, the symbolic aspects of the first walk on another celestial body, and the scientific work carried out by astronauts Neil Armstrong and Buzz Aldrin on the lunar surface. The presentation will begin shortly before 8 p.m., just as it did in real time in 1969, and will continue for the two hours and 40 minutes of this historic event.

Bio: Chris Gainor is a historian specializing in the history of space flight and aeronautics. He has five published books and is currently writing a history of the Hubble Space Telescope for NASA. He is President of the Royal Astronomical Society of Canada.

Producers – Imagine Create Media
Space Suite IV
A series of 10 short films that explore the infinite wonders of our universe and our interactions with the cosmos.
Space Suite Apollo
Trace the history of NASA’s Lunar missions from Mercury to Gemini, to the Apollo Missions that ultimately landed a man on the moon. Set to the music of Johann Sebastian Bach, Space Suite Apollo gives viewers an unflinching look at the raw footage that continues to capture the world’s imagination.

Regular admission applies to the Royal BC Museum and IMAX Theatre.

Gallery of photos from Astronomy Day 2018

Regular admission applies to the Royal BC Museum and IMAX Theatre. 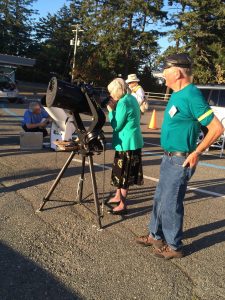 Regular admission applies to Royal BC Museum and IMAX Theatre.

Regular admission applies to Royal BC Museum and IMAX Theatre. A Beautiful Planet – an IMAX® 2D and 3D Experience – Take a Journey on the International Space Station! – starting at 11AM (every 2 hours).

What a day! Absolutely first-rate effort by RASC-Victoria members for a successful International Astronomy Day at the Royal BC Museum and Dominion Astrophysical Observatory.

Huge thanks to our incredible RASC volunteers, as well as those who generously donated their time and knowledge from NRC, FDAO, UVic, Pearson College, the Planetary Society, and our guest speakers Rita Mann, Maan Hani, Ivar Arroway and Michael Webb. Special thanks go to David Lee and Nelson Walker who arranged the volunteers and guest speakers, and made the whole event look amazing.

We had fun, and the public LOVED it.
Well done, and THANK YOU everyone!

Congratulations and thanks to everyone from RASC, FDAO, Science Ventures, Planetary Society, NRC-HAA, and the RBCM who made two extraordinary events possible. The community commitment to engaging, quality outreach and to support of the work of the Herzberg staff at DAO is phenomenal. That we have come so far since CU closure is the result of sustained effort by so many people, for which my gratitude is boundless!

Thanks to all the volunteers during the day and at night at the DAO who made it a very worthwhile day.

8PM-11PM at the top of Observatory Hill – nighttime observing

Photos from this year’s event

Time/Location: Saturday, May 3, 10am-4pm at the Royal BC Museum, and 8pm-11pm at Observatory Hill

It was wonderful to see so many enjoy themselves!

Our sincere thanks go to all the volunteers for their contribution to make this year’s IAD celebration an enjoyable experience for everyone. This year we were very fortunate to be back at the Royal BC Museum. It is a good site to attract a large public audience. Many thanks go to the Museum staff for their cheerful cooperation.

On International Astronomy Day, Saturday, May 3rd the RASC and the NRC Herzberg invites everyone back up onto Observatory Hill where the Centre of the Universe displays and the historic Plaskett Telescope will be re-opened for night sky public viewing.

Opening of the Hill is from 8 pm to 11 pm. Please wear warm clothing as it can be cool and windy in the evening. Parking is very limited so please follow all the directions of the Commissionaires for access.

8:30 to 10:30 pm: Tours of the Observatory and Night Sky Viewing with the Plasket Telescope facilitated by Dr. David Bohlender

Please join us as we celebrate the RASC’s 100th Anniversary in 2014. Thank you to the NRC/Herzberg for permitting us to put on this special evening program with them and we hope that we will be able to have more open Saturday night sky viewing in the summer. For more information please contact: Lauri Roche by email.