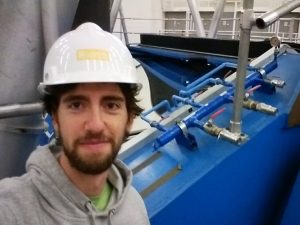 The past 20 years has seen the dawn of a new field in astronomy: extrasolar planets, or exoplanets for short—planets orbiting around stars in other solar systems. We now know that the Universe is teeming with exoplanets, thanks largely to the help of the Kepler space telescope, which finds exoplanets by seeing their shadow on its much brighter host star. Although there are a number of different methods of finding exoplanets, my research focuses on an exoplanet detection technique called direct imaging, which as the name suggests is designed to directly image these other worlds. But this is not as simple as it sounds, and it ultimately requires the use of our most powerful telescopes and specially designed optical systems in order to distinguish an exoplanet from the overwhelming glare of its host star. In light of the upcoming total Solar eclipse in August 2017, I’ll describe one of these instruments, called a coronagraph, which was first used to observe the Solar Corona without the help of the Moon! After outlining these challenges, both in engineering and in physics, and how they can be overcome, I will highlight the main instruments and detections in this field of direct imaging, and also compare the advantages direct imaging has over other techniques. Come prepared to see real pictures of other worlds!