This occurs when Mars, Earth and the Sun are aligned with Mars located on the opposite side of Earth from the Sun. Mars will slowly rise on the eastern horizon late that evening … not the best viewing situation. A major dust storm developed on May 31st and has obscured details of the Martian surface. (see image below) Surface details will gradually re-emerge later this Summer as the dust storm subsides.

The viewing characteristics of Mars as seen from the Victoria area are tabulated below for the remaining DAO Saturday Night Summer Star Parties of the season.

Notice that the appearance of Mars (angular diameter) will decrease very slowly after the opposition. One week following opposition the angular diameter will only be 0.5% smaller but Mars will rise earlier and surface features may start to re-emerge.

Evening viewing conditions of Mars therefore will be more favourable and convenient in August.
Consider attending a DAO Saturday Night Star Party this August.
Volunteers of RASC will be there to share the night sky with their telescopes.
Click here to obtain free Star Party tickets. Note: No Star Party on July 28th.

In the Victoria area the best evening views of Mars are obtained with an unobstructed view of the southeast such as: Cattle Point Urban Dark Sky Park, Clover Point, Island View Beach, and Mount Tolmie. In the late evening Mars will appear fairly low in the southeast as an exceptionally bright red dot. It is hard to miss. Check it out.

Click here to learn more about the Mars 2018 Opposition and observing hints.
Click here to see images of the 2018 Martian Dust Storm. 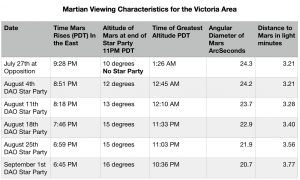 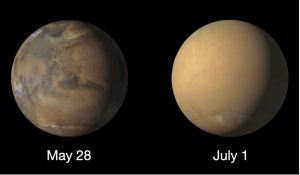 On a mild July 4th evening about 10 RASCals assembled at Cattle Point Urban Dark Sky Park for the Inaugural Transboundary Fireworks Festival. Attendees were rewarded with spectacular views of two July Forth Fireworks shows. Between 10 PM and 10:15 PM Friday Harbour on San Juan Island took the stage. Terrain blocked some of the low level displays but the airborne clusters filled the field of view of most scopes. The main event occurred between 10:30 PM and 10:50 PM when Fisherman Bay on Lopez Island launched their salvo. Although slightly farther away we enjoyed an unobstructed view of the Lopez conflagration.

A variety of scopes were deployed including refractors, newtonian reflectors, spotting scopes, binoculars as well as an 8 inch Schmidt Cassegrain. In order to squeeze in the view RASCals resorted to lower magnifications. This confirmed that you do not need a big scope to enjoy the show.

It took about one minute 20 seconds for the muffled booms to arrive on the scene. This soundscape combined by the spontaneous whoops and ah’s from the RASCals added to the party atmosphere. It would have been nice if we were able to transition from the fireworks to star gazing … but clouds intervened.

Should we try again next year? Randy Atwood’s attached photo captured Chris Aesoph giving it two thumbs up! So I reckon that is a yes. It was a RASCal Worthy event.

The attention the photons received was well deserved.

Thanks to all the attendees.